The Coopers Shoot property has been in the Armstrong family since 1882. Nestled in the hills between Byron Bay and Bangalow in Northern New South Wales, Australia. Originally the property was set up as a dairy operation supplying butter to England and cream to the nearby Norco milk factory. As the dairy industry waned in the 1960’s, production switched to beef on their 200 acres of rolling pasture. Hugh and Heather, the 5th generation of the family started managing the property in 1998 and introduced horticultural production into the farming operations.

In 2002, the Byron Bay farmers market commenced operations, and this saw the Armstrong family switch to solely selling their fresh vegetables at the local produce market. This gave them the opportunity to interact with their consumers directly. Cooper’s Shoot Tomatoes were born. 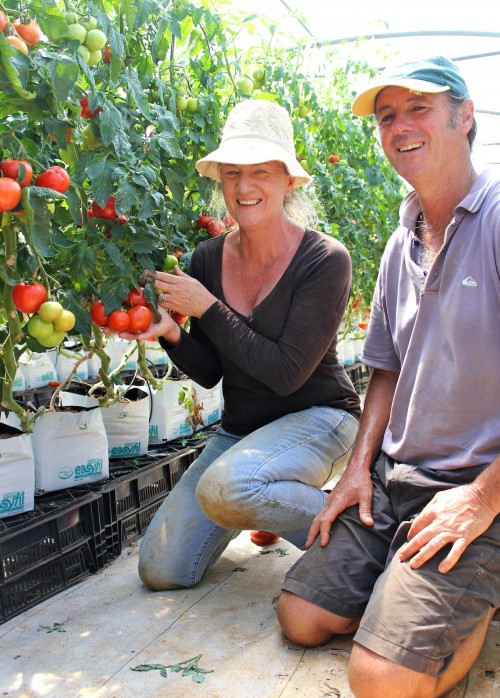 Coopers Shoot Tomatoes grows a selection of gourmet vine ripened tomatoes, leading the way in the local market for taste, variety and flavour. The Coopers Shoot market stall is always bursting with bright red glossy tomatoes that taste just as good as they look. Heather says allowing her tomatoes to ripen on the vine is the secret to the flavour. Tomatoes you’ll find in the supermarket are often picked green, and then gassed to set off the ripening process. This results in a poorer taste and mealy texture. Mass produced tomatoes are also stored in cool rooms, which diminishes their flavour. This is not the case however with Cooper’s Shoot Tomatoes. Taste Them for Yourself